Google’s social network finally takes shape as Google+ and looking back at Google Wave and buzz we are happy to see that Google had its homework well done.

Disclaimer: Most reviews of Google+ are desperately vague and written by authors who haven’t actually used it. I got to spend nearly 12 hours with it and finally created an opinion of my own, views expressed here are unbiased and to the point.

What Google Plus is about:

Its a Social network built by taking Facebook as the platform base, and building all new interface and features on top of it. Google Plus integrates almost all major Google services into one place pretty nicely.

What Google Plus is Not:

Its not an instant Facebook killer. Google plus is far from complete on features, but just like facebook, it would gain over time and eventually beat facebook, provided Google doesn’t suck at marketing this time.

Google has learnt a lot from Buzz mistakes and technical advancements of Google Wave. The combined experience must have been a shocker for the management that actually lead to a new approach to next generation Social network built entirely on HTML5. 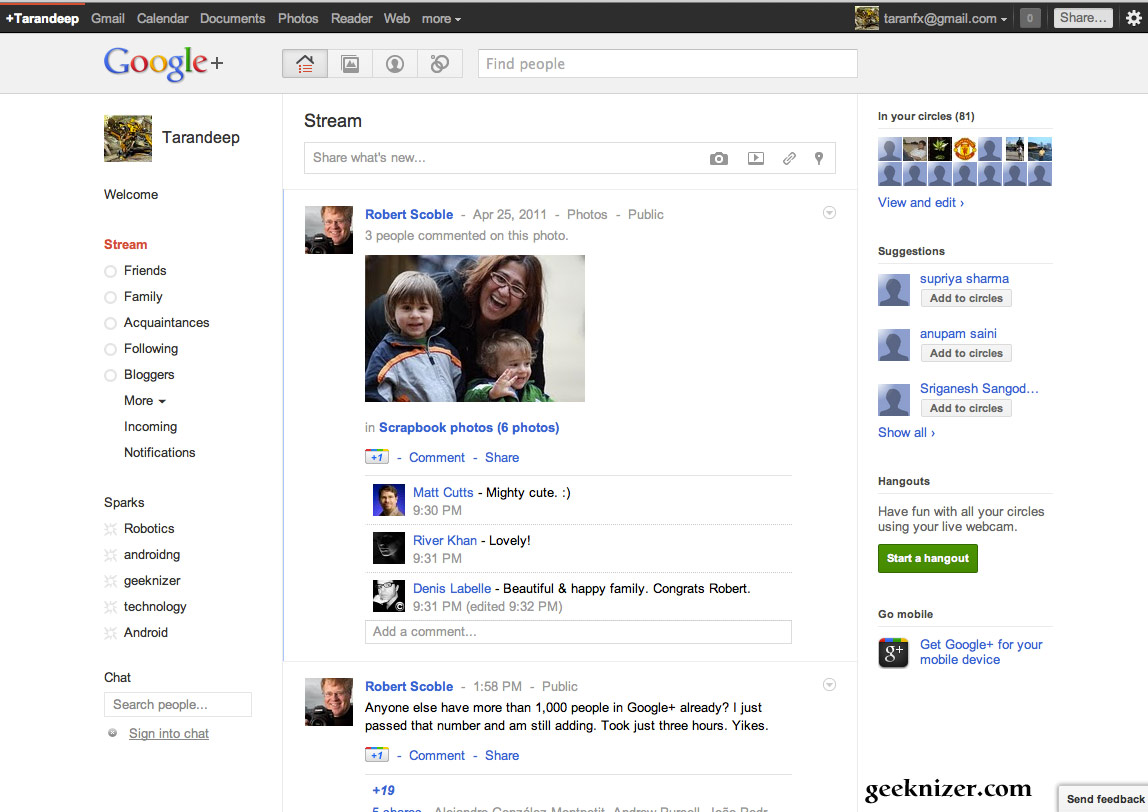 On the first look, Google+ looks cleaner, snappier and more intuitive than Facebook. And after having it used for nearly a day, the opinion has grown stronger. Every part of the user interface is faster than Facebook, and yet better on eyes. Searching for people, for instance, is super fast. Think of people search as Google Instant for Social.

All your social contacts happily reside inside Circles. Circles give you a very graphical representation of your contacts grouped into “geometric circles” each belonging to different categories like Family, Friends, Co-workers, etc. Organizing contacts is among the easiest you could find on a web application, thanks to HTML5. Finding & Dragging multiple contacts into circles is fun. It took me couple of minutes to organize all my contacts.

What excites you? With Sparks, Google is trying to capture the market of “topic based following”, the ones that are already popular with Quora or, #hashtags of twitter. You can now follow topics of your interest from around the web with a click of a button. This is not Facebook pages or groups by any sort, these are plain meta tags, and the returned results are site agnostic. 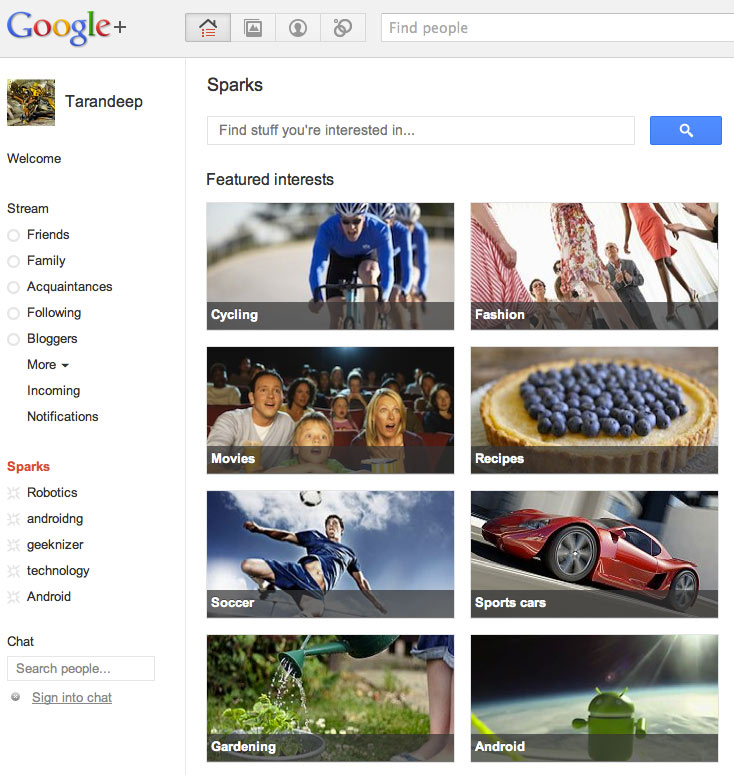 This is something Skype is already jealous of and Facebook would hate in the future. Live video collaboration for upto 10 people is now actually possible using Hangouts on G+. You chat and have live audio/video stream like never before.

Just like Google got notifications right in Android, they can’t go wrong in Google+. Notifications are clean, interactive and are placed in the upper right corner of the navigation bar. 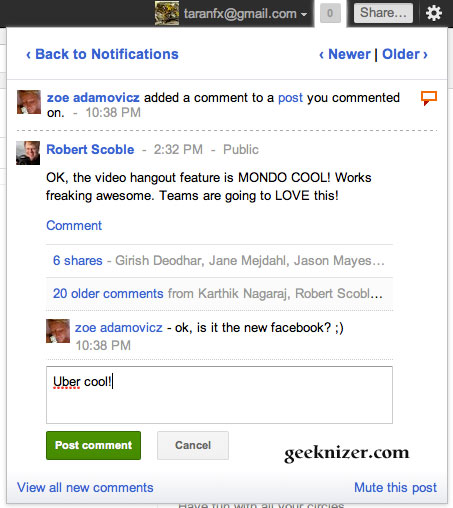 The notifications are visible across all google sites, and come handy. For Instance when you receive a comment on one of your posts, you can click and bringdown a dialog which actually lets you comment inline without having to navigate away from the page you are currently on. Facebook forces you to goto the page and of course doesn’t notify anywhere other than its own site.

Apart from that, Google+ can send email and sms notifications for almost all sorts of events that you choose to.

If there is feature I’ve to chose that I love the most, photos would be it. With the Picasa integrated into Google+, you can’t really go wrong. Photos on Google+ are more like Picasa on steroids, its fast, nifty and intuitive. Unlike Facebook where you only see photos of a limited size and resolution, Google+ takes it to near fullscreen placing the comments nicely along the side bar and a slideshow at the bottom. 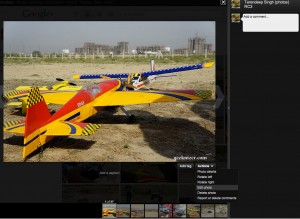 Whats more is that you can edit photos and give some easy touches using the inbuilt photo editor, thanks to the Picnik acquisition. 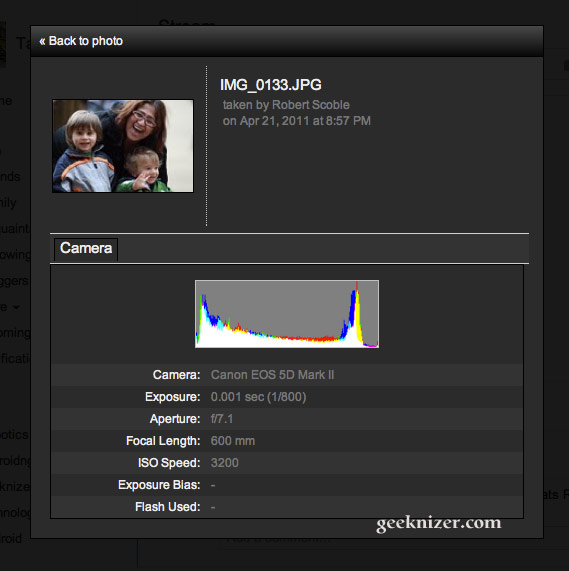 The Android Google+ app is one pof the best apps I’ve seen on android or iPhone. The interface is slick and smooth. Its powerful yet easy. You can quickly jump between the circles, profile, photos, and share new stuff with a click of a button. 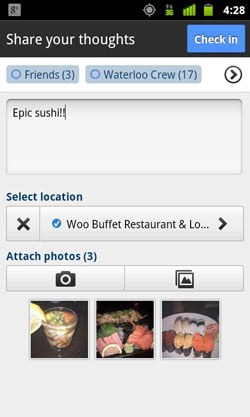 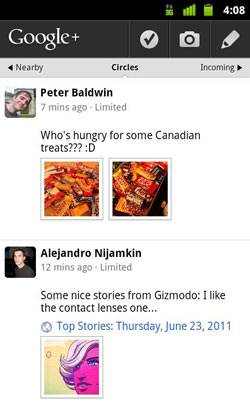 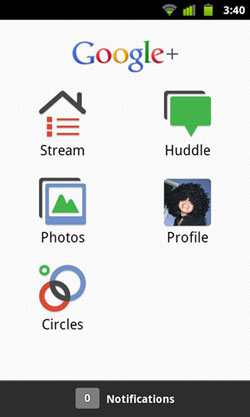 You even get to see the buzzword around your place under “near me” sliding tab.
Camera photos are automatically uploaded to a private album which can later be shared on Google+ streams of your choice.

iPhone users are pretty much out of luck till apple approves the Google+ app. Meanwhile, web app should satisfy the tastes.

Google + has done a good job at rethinking Social networks. We need webapps that take full advantage of our modern browsers that are capable of HTML5 and great graphics, animations. Facebook has started to go there but Google+ has already attained it.

Google+ is short on features, at least for now. What I miss on Google+ is Fan Pages for business, websites. Facebook pages are great for attracting millions of fan following. I don’t know if its even on Google’s Todo list or not, but we definitely miss it.

Other than that third party API, and applications are not yet available. To stay in market Google would have to push them soon enough. With release of API, we would start seeing 3rd party apps building Google+clients & start integrating other webapps, native apps with Google+. Applications is other part of the story, Facebook users love playing games and other time killing applications. May be google integrates it with Chrome Webstore or something else to make apps possible, but it would be a must.

We don’t believe Google+ would be a Facebook killer instantly, even though its better. The point to consider is that Facebook is 700million users strong, it would take a year or move even if all of them start thinking about